Herbert Hoover was born on August 10, 1874, in West Branch, Iowa to a Quaker family. His father, Jesse Hoover, was a blacksmith and later owned a farm implements store. His mother, Hulda Randall Minthorn Hoover, was born in Canada. Her family moved to West Branch, Iowa when she was 11. She was a school teacher from 1867 until she married in 1870. She and Jesse had three children: Theodore, Herbert, and Mary. Her husband, Jesse, died in 1880. Hulda took in sewing and renters to make ends meet. She also became a Quaker minister and traveled several times a year to attend meetings. On one such trip, she became ill and developed typhoid fever. She died on February 24, 1884. 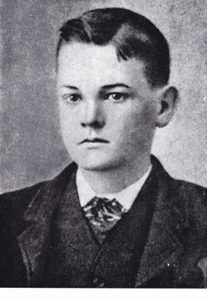 After Hulda’s death, the three children were separated and sent to live with different relatives. Herbert, known as Bert, lived with his uncle Allen Hoover for part of the time. He also spent several months living with his Uncle Laban Miles on the Osage Indian reservation in Oklahoma. In 1885, Dr. Henry John Minthorn, Bert’s uncle, asked the relatives to send Bert to Oregon where he could attend the Friends Pacific Academy and be helped with chores. Bert took the train across the country, bringing all his belongings and enough food for the trip. Bert brought with him a prayer card that his mother gave him before she died. It read: “Leave me not nor forsake me, O God of my salvation. Psalms 27:9. I will never leave thee, nor forsake thee. Hebrews 13:5.” He put the prayer card on the wall in his room in Newberg.

Children who grew up in the nineteenth century were expected to work. Their help was needed. Bert Hoover would have been expected to perform chores when he moved to Newberg from Iowa in 1885.

As a boy, Hoover felt the tension between work and play: “I was at once put to school and the chores. These included feeding the doctor’s team of ponies twice a day, hitching them up periodically, milking the cow, and splitting the wood. All this routine, plus the abundant religious occasions, somewhat interrupted the constant call for exploration of the Oregon forests and streams.”

​During vacations from school, Bert found work on the surrounding farms. Sometimes, he found work among Quaker families he knew. On at least one occasion, he found a job over five miles from the Minthorn’s house in Newberg. He put in long hours and found the room and board close to the fields where he was working.

When Hoover was 14 he and the Minthorn family moved to Salem. There, Dr. Minthorn started a land settlement business with several other Quakers.  Hoover was able to be involved in Dr. Minthorn’s business: “I was offered the distinguished position of office-boy. …Sometimes I slept in the back office after night school. … The bookkeeper of the firm used some of my odd time and in return, I received early instruction in bookkeeping. …With the aid of [Miss Louise Heulat] the stenographer, I learned to use a typewriter fairly well.” 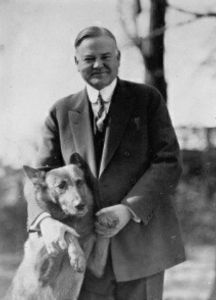 Stanford, the Presidency and Beyond

While Bert was living in Salem, he decided to become a mining engineer. In 1891, he entered the first class at Stanford University where he majored in Geology. After becoming a very successful figure in the mining and oil industry, Hoover retired in 1914, having acquired sufficient wealth to allow him to stop working.

At the outbreak of World War I, he assisted Americans to return to the United States. He engaged in an enormous humanitarian effort through the Commission for Relief of Belgians which led to his appointment as Food Administrator, then-Secretary of Commerce. In 1928, Hoover was elected the 31st president of the United States; this was Hoover’s first elected office. He is the only president to have ever lived in Oregon.