Learn about the history of the Hoover-Minthorn House Museum in Newberg, Oregon. 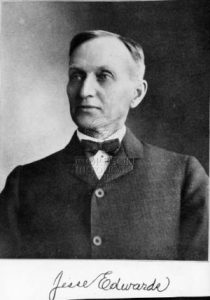 The Hover-Minthorn House Museum was built in 1881 by Jesse Edwards who is considered the “Father of Newberg.”

Jesse Edwards followed fellow Quaker, William Hobson, to the Newberg area to establish a community of Friends. When Edwards arrived in Portland, he took a steamer down the Willamette River to Dayton. He purchased a non-productive wheat farm from Peter Hagey. The property had been the northern part of the Joseph Rogers Donation Land Claim. Edwards proceeded to break up the property into lots for a town. This eastern part of Newberg became known as “The Grubby End,” and for a time, competed with a separate community at the western end known as “Froggy End.” 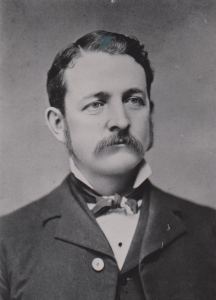 Henry John Minthorn was born in Ontario, Canada in 1846 to a Quaker family that had emigrated from England. His parents lived on a dairy farm, and like many youngsters, he disliked the regimented work on a dairy farm. In 1859 the family moved to West Branch, Iowa and joined the Quaker community. During the years before the Civil War, Quakers were quite active in helping slaves escape to freedom in the north via the underground railroad. Minthorn participated in this work.

Early Newberg citizen Jesse Edwards built the house in 1881 in a style typical of rural American homes of the late nineteenth century. It has Italianate details in the trim under the eaves. Edwards sold the house to Laura and John Minthorn in 1885 when the Minthorns moved to Newberg so that Dr. Minthorn could serve as the first superintendent of the Friends Pacific Academy. Typical of many deeds in Newberg at that time, the deed stipulated that if alcohol was found on the premises, the deed reverted to the grantor. Herbert Hoover lived in the home with the Minthorns from 1885 to 1888. In 1888, the Minthorns moved to Salem and sold the house. Hoover moved to Salem with them.

Birth of the Museum 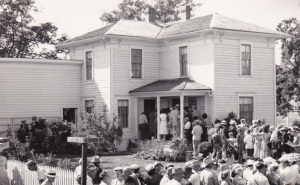 The house was restored by the Herbert Hoover Foundation, a non-profit corporation organized under the laws of the State of Oregon in 1947.

The original incorporators, officers and directors of the foundation stayed in office and managed the business of the foundation, including the purchase of the house, the purchase of the adjoining house for the caretaker, and the restoration and re-furnishing of the museum. These officers and directors included: Burt Brown Barker, president; Irene Gerlinger, Vice-President; Hervey Hoskins, Secretary; F.C. Colcord, Treasurer; and Levi T. Pennington, Emmet Gulley, and Laura Paulson, directors.

In the 1880s when the Minthorn family lived in Newberg, the yard around the house reflected the necessities of a family in a young settlement, an orchard with young fruit trees.

Apple and damson plum trees as well as the pear tree that Hoover remembered so vividly were planted in the yard. The trees provided the family with fresh fruit during the summer. Vegetable patches yielded fresh produce and herbs, and some were dried for later use.