Henry John Minthorn was born in Ontario, Canada in 1846 to a Quaker family that had emigrated from England. His parents lived on a dairy farm, and like many youngsters, he disliked the regimented work required. In 1859, the family moved to West Branch, Iowa and joined the Quaker community. During the years before the Civil War, Quakers were quite active in helping slaves escape to freedom in the north via the underground railroad. Minthorn participated in this work.

Minthorn entered the State University of Iowa in the early 1860s planning to be a teacher. When Union Army Recruiters arrived on campus, he and his school mates joined. He served less than a year, did not see battle, and was discharged in November 1865. Joining the army did not set well with those in his Quaker community, who were avowed pacifists. After his dismissal from the Army, Minthorn completed his education and went on to teach in Iowa and Michigan. In 1873, he entered medical school at Jefferson Medi

cal College in Philadelphia, Pennsylvania and graduated in 1877. Through the rest of his life, he combined teaching and medical practice. Physicians, especially rural physicians, needed a second profession to make a living since many patients were unable to pay cash for care. 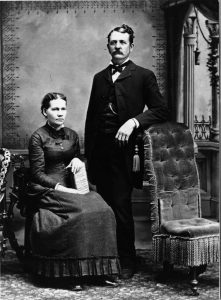 He became a government agency physician and school administrator, traveling to Oklahoma and Oregon. Then, in September 1885, he and his family moved to Newberg so he could b

ecome the first superintendent of the recently established Friends Pacific Academy, forerunner of today’s George Fox University. He also served as a local physician to the community and areas surrounding Newberg, Oregon.

The need for good medical care was apparent in Dr. Minthorn’s own family. His brother-in-law had died of consumption, his sister Hulda died of “cold on the lungs” and even his nephew, Herbert Hoover, had a bout of croup as a baby so severe that some members of the family thought Herbert had died. Herbert’s aunt, in “laying him out” noticed some sign of life and revived him. Clearly Minthorn knew of the need for good medical care and the difference it made in the lives of every day folks.

Medical Practice in the 1880s

Medical options in the 1880s were limited. Diagnostic tools basic to medicine today were not available in the 19th century. No lab tests, no x-rays and no scanning equipment could aid the physician in determining the needs of the patient. In 1885, there was no hospital in Newberg, although in 1875 the St. Vincent nuns had opened a hospital in Portland. No antibiotics were available, and many, old and young, died of infections that would be readily treated today. Surgery and anesthesia were still in their infancy and surgical procedures were usually performed only as a last resort.

Country doctors did not have offices, as are common today. When someone was ill, the family summoned the doctor or sometimes a patient could be seen at the doctor’s home, usually in the parlor. House calls were common, and Dr. Minthorn had several horses and a buggy that he used to reach those in need. When beginning a journey to see a patient, the rural physician needed to bring all supplies which might be needed. At times the doctor might stay with the patient for several hours, especially in cases of complicated child birth, trauma or severe illness. Often the doctor would be exhausted with the long hours and travel over difficult, muddy roads. Falling asleep behind the wagon team was common, and thankfully the horses always knew the way home and where to find their next feed!

Herbert Hoover, who was orphaned before his tenth birthday, was Dr. Minthorn’s nephew.

When the Minthorns moved to Newberg, they asked their relatives to send Bert to come from Iowa to live with them and attend the Friends Pacific Academy. Uncle Henry was stern, demanding, and inflexible, in young Hoover’s eyes.

However, one summer day Bert and friends tried making their own cherry bomb fireworks. After the fireworks exploded, Dr. Minthorn patiently spent several hours picking out pieces of debris from the skin of several small boys. No further punishment ensued.

A Quaker, Rural Physician and Teacher

One belief that Dr. Minthorn shared with today’s medical community is that life style often leads to illnesses that could be prevented if people took better care of themselves. From Dr. Minthorn’s perspective, education and Christianity were twin solutions to the world’s problems. The Minthorns moved to Salem in 1888 where Dr. Minthorn operated the Oregon Land Company. After it failed in 1893, Dr. Minthorn traveled and worked in Alaska as a physician and teacher. He operated a sanitarium in Newport, Oregon. Dr. Mnthorn died in Portland, Oregon October 11, 1922. His obituary ran locally and in The Wall Street Journal. Herbert Hoover’s adolescent difficulties with his Uncle John were resolved by the wisdom of age. He later ascribed the attributes of commitment, principles and intellect to the lessons learned from his stern uncle. He noted in his memories that “adolescent impressions are not of historical importance.” When he dedicated the Hoover-Minthorn House, Hoover declared it was a testament to rural physicians, and a legacy to Dr. Henry J. Minthorn, a Quaker, rural physician and teacher.

Dr. Minthorn, as did most rural physicians, relied heavily on horses for transportation to his patients. Dr. Minthorn was also quite fond of horses, but this quality did not pass down to his nephew.

One day Dr. Minthorn asked Bert to deliver medication to a patient. Bert wanted to use his wheel (bicycle), but Dr. Minthorn insisted Bert take the horse. When Bert finally returned, on foot and leading the horse, his dislike of things equestrian was finally known.

Later Herbert Hoover was to write of horses:

I finally arrived at the conclusion that a horse was one of the original mistakes of creation. I felt he was too high off the ground for convenience and safety on mountain trails. He would have been better if he had been given a dozen legs so that he had the smooth and sure pace of a centipede. Further he should have had scales as protection against flies, and a larger water tank like a camel. All these gadgets were known to creation prior to the geological period when the horse was evolved. Why were they not used?

Nineteenth century medical knowledge was incomplete and, at times, incorrect. Without the ability to treat common ailments reliably, many remedies were developed to “cure” whatever symptoms people experienced. It was not unusual to find a “patent medicine” claiming to cure tuberculosis, dyspepsia, venereal disease and infant colic all in one bottle of miracle liquid. Almost all of these bottles of medicines contained high levels of alcohol, 50 percent alcohol was not uncommon; cocaine and laudanum were not uncommon ingredients. The dosages suggested for these medications were not listed in most cases and since some of these claimed to treat infant colic and tuberculosis in adults with the same formulation, they were especially hazardous for children. Infants in the 19th century did have colic, and any parent who has had to deal with colic, even in the 21st century, can understand why some were willing to try these drugs 150 years ago. Sadly, some infants were subjected to overdoses of alcohol, cocaine and or laudanum.

The patent medicine industry reached its peak during the last half of the 19th century. They were heavily advertised and sold well. Women were frequent users of patent medicines and were often directly targeted by the manufactures. “Female troubles” and “female complaints” were commonly listed as symptoms these medications could cure. Many users found that they needed to have their daily dose of ‘medication’, to the point that addiction became an eventual focus of the movement to regulate drugs. By the end of the 19th century, physicians, medical societies, and the temperance movement in America were strongly united in the desire to reform the industry. At the turn of the century, reforms would be enacted to require a list of ingredients, correct misleading advertising and enact other reforms that would eventually lead to a reliable pharmaceutical industry.

Before any 21st century reader becomes too critical of our ancestors, it should be noted that almost none of the common medications we all take for granted were available. Herbal remedies did exist and were used to some degree, but they were not always known to many segments of the population. For example, fevers were treated with cold water baths as antipyretics such as aspirin and Tylenol were not available. Antibiotics would not be available for another fifty years, and the concepts of antisepsis for wound care were not yet developed. Pneumonia, tuberculosis, infected teeth and venereal diseases were frequent killers.

The treatments of illnesses were often labor intensive. Since antibiotics were not yet available, wounds often required frequent irrigation with boric acid, and just as frequently changes of soggy dressings. Patients fighting an infection and fever would require lots of changes of bedding and personal care. At that time, bed rest was thought to be better than early ambulation. Without disposable dressings and automatic washing machines, the work required to nurse someone back to health was significant. Nurses were not generally available, and the “work of nursing” fell to the mother or other relatives in the house.

Cost:
Adults: $5
Seniors and Students: $3
Children under ten: Free
Families of four or more: No more than $20.

March through November
Wednesday through Sunday
1:00 to 4:00 pm.

December and February
Saturday and Sunday
1:00 to 4:00 pm