Photos on this page are provided through the generosity of Leslie Hoover-Lauble unless otherwise identified.

Jane Fellows directs and plays Lou Henry Hoover. Ms. Fellows appeared as Lou Hoover in 2014 at the Newberg Friends Church in a production by The National Society of the Colonial Dames in the State of Oregon and again at George Fox University in 2015. Her outstanding characterization of this remarkable first lady was enthusiastically received.

Ms. Fellows’ extensive Portland performances include work with Artists Rep, Profile Theatre, Theatre Vertigo, Coho Productions, Lights Up! Productions, Lakewood Theatre, Mt. Hood Summer Rep, Many Hats Collaboration, The Bluestockings and Oregon Children’s Theatre. Her signature characterization may be Emily Dickinson in The Belle of Amherst, a role she has performed for over 25 years.

For further information about Ms. Fellows’ remarkable career as a director and actor, please see janefellows.com. In order to schedule a performance of First Lady Lou, please contact Ms. Fellows at fellowsjaneliz@yahoo.com or (503) 939-1800.

Rebecca Christian is an Ames, Iowa, author whose work includes the plays Mothering Heights (a musical-comedy review with Tracy Rush) and Insomniacs and the book That’s Our Story and We’re Sticking To It. She is a regular columnist for the Telegraph Herald in Dubuque, Iowa. First Lady Lou toured Iowa with a grant from the Iowa Humanities Board, and it has also been performed at Stanford University and The Smithsonian.

Born in Waterloo, Iowa in March 1874, Lou was a lively active girl who loved sledding and skating on the Cedar River near her home.

In 1891, Lou attended the Los Angeles Normal School and received a teaching certificate from San Jose Normal School. Inspired by a lecture by geologist J. C. Branner, she enrolled in Stanford University where she studied geology and Latin. She met Herbert Hoover in her geology lab. While Herbert worked as a mining engineer in Australia, Lou finished her degree at Stanford, becoming the first woman to graduate from Stanford in geology. Bert sent a marriage proposal from Australia and came to California on his way to China. Dressed in their traveling suits, they were married in Monterey on February 10, 1899 by a Roman Catholic priest from the local mission even though Lou was an Episcopalian, Bert a Quaker. 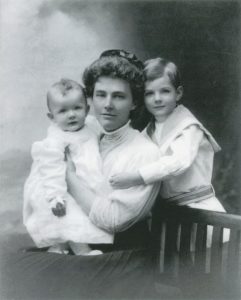 The Hoovers traveled throughout the world for several years from their home in London.

Lou and Herbert obtained a copy of Georgius Agricola’s De Re Metallica, written in 1556, and translated it. The Hoovers were awarded a gold medal for achievement from the Mining and Metallurgical Society of America after the translation was published. In 1914, when war broke out, the Hoovers began to assist Americans stranded in Europe.

Lou organized the Society of American Women in London to provide clothing, lodging, food and tours around London. While Herbert organized the Commission for Relief of Belgians in London, Lou formed a California branch to undertake relief projects.

When Herbert was inaugurated as president, Lou took on new roles as the first lady. She was the first first lady to deliver a radio address.

Lou organized many social events and was the first to entertain a black woman in the White House when she invited Mrs. Oscar DePriest, wife of a black congressman, to tea, an event that generated scathing criticism.

Lou became active in Girl Scouts, serving on the national board and as president of the national organization (1922-1925). She led the first Girl Scout cookie drive in 1935. Lou organized a conference in April 1923 that developed a model of athletics for girls and women based on promotion of competition through enjoyment of the sport and development of good sportsmanship and character.

After the Hoovers left the White House in 1933, Lou enjoyed life in California in the house she had designed adjacent to the Stanford campus.

The Hoovers also lived in the Waldorf Astoria Hotel and after attending a concert on January 7, 1944, she suffered a fatal heart attack and died there at the age of 69.